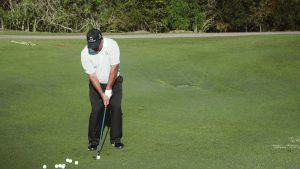 The chip shot is usually required when the ball is close to the green but not on it completely. The shot spends less time in the air and more time rolling towards the target. It may have an awkward feel to it for many first timers and results in poor control for many that overthink the shot. The hip and wrist movements are difficult to do initially for many. Practice and correction can result in a high-quality routine shot.

Some initial advice is to keep the chest still when lifting gold balls into the air as a result of the chip. The stance should have an even distribution of weight on both feet. The player must also prompt the back foot closer to the golf ball in order for the chest to be in front of the ball. The weight should be on the rear foot, the hips should open and propel the rest of body naturally. Watch for wrist movement as there should be very little movement when the swing happens. A practice swing should be taken and the finish should show a flat arm before the initial shot.

A long gated shaft, or stick will prevent unnecessary wrist and chest movement when hitting the ball. This method stops wrist flicking and the length will hit players in the ribs as a result of poor movement.

Chipping requires a consideration of stance, weight distribution, moving the rear foot ahead and opening the hips so that weight propels naturally. Chest and wrist action should be minimised Correction of the chip shot should be completed regularly in order to improve the chipping game continually.